I'm involved in a new project that aims to bring The Menorah Game back to life. The Menorah Game is the original prototype version of It's Alive, which was published by Jackson Pope of the now defunct Reiver Games. More info about It's Alive can be found here.

It is a joint project between myself, Nadine Wildmann who took over the Jerusalem Strategy Gaming Club when I moved to Raanana, and our friends Bill and Shirley Burdick in the US. Nadine is a game tinkerer (she created a biblical themed version of Ra for our group), a PR specialist, and a Wordpress wizard. Bill is the designer of a wickedly innovative RPG system called Death of the Vele; here is an interview of Bill by New Style. Shirley has designed and run live action Euro-style games for large groups.

We are still exploring what is required to publish the game or license the game to another publisher. Kickstarter is a strong possibility. Nadine has commissioned new artwork for the game that you can see on the site. Example: 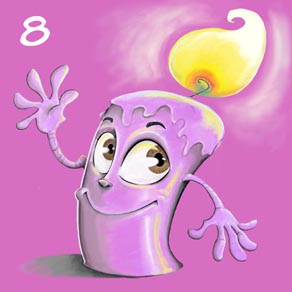 Some of you like the horror theme of It's Alive, and that's tribute to the publishing skills of Jackson. However, there were many others who liked the game but wanted a more family-friendly alternative. We hope that this re-re-theme will serve the purpose. It's about candles on your menorah, but there is no actual Jewish content in the game, so it should be enjoyable for anyone. Of course, the basic mechanics will remain the same.

If you're at BGG.con, Nadine is there, and Bill and Shirley will be there soon, so search them out and say hi.
No comments:

Played Inca Empire on shabbat with Abe and Sara. I took it to a decisive victory: 122 to 121 to 120. The trouble is that I've played the game two times before, but these were their first plays.

The game is divided into a few phases that start with everyone getting workers and end with everyone scoring their board positions. In between, you alternate between a) playing cards that affect two players in the game (either you and an opponent, or two opponents; which you choose depends on whether the card is beneficial or harmful) and then b) placing two roads followed by an action: build a garrison, build a city, build a temple, build a terrace, conquer a territory, place another road, or pass. Each item gives some greater points one time only to the person who built it and some lesser points at the end of each phase to all players connected to it. Conquering territories and building terraces increase your worker income.

The phases get longer as the game goes on, which means played cards accumulate. The cards give you bonuses, or make things more or less expensive, etc. At the end of each phase, all cards are cleared away.

My having played before didn't prevent me from forgetting most of the rules and making some rule mistakes that I only corrected as the game progressed. For instance, only about two thirds of the way into the game did I realize that we each get two free roads each turn, not one. As sometimes happens with misplayed rules, I kind of liked the misplay. When we started playing with two roads each, we all connected to just about everything nearly immediately, which was kind of anti-climactic. On the other hand, the reason that we could all connect to everything all of a sudden was that the first cities and garrisons were all built close to the starting positions, so it's probably a wash.

We all enjoyed the game. It's probably a bit dry for some. There's a theme in there, but it's hard to remember.
No comments:

7 Reasons the Republicans Lost and Deserved It


No one person or party represents all of my political views. I agree with Democrats on some issues, Republicans on others, and Libertarians on still others. On yet other issues, no one represents my views.

Nevertheless, my hatred for the political system doesn't blind me to the problems of the Republican party. Here are seven reasons why they lost this election.

1. They made religion center stage.

Official debates and stump speeches were mostly about the economy and jobs, but Republican talking points that made headlines were about God, God, and God. Many Republicans apparently believe that America is defined by its bible-thumping conservatives. It isn't.

America left Europe because they wanted to be free and independent from religion-based government. Over and over some Republicans want to shove Christianity down our throats, from public prayer, to restricted abortion, to who can marry, to the ten commandments, etc etc. Americans do not want religion mixed with government. They want religion to be personal choice.

2. They threatened abortion and contraception

A direct result of the first point, too many Republicans talked about abortion. The idea that 40 years after Roe v Wade American women could lose basic health and human rights was enough to scare millions of women into the Democrats' pocket.

I get that you honestly believe that a fetus is a human; but that's your belief, and it's a religious belief, it's not everyone's belief. If you restrict abortion because of your narrow view of the bible, you become like the fundamentalist Islamic nations that you so rail against.

3. They are out of touch regarding gay rights.

Also a direct result of the first point, the right for all people to consensual love or sex with whomever they want is inevitable and it's sacred. The argument that someone else's private life diminishes some so-called institution of marriage is simply insane. When all of your arguments are based on the bible, you should stay out of American politics.

4. They cling to the trickle down economic model with no government oversight.

The notion that its good to have rich people because they give money to poor people has been proven wrong again and again, but that's still the core Republican economic philosophy. The wealth gap gets bigger and bigger every year.

Too many large companies drive out competition from struggling small companies using monopolistic practices rather than by out-competing. Too many companies practice short term gain without considering human consequences. Republicans push for an economy that acts like a "business", which perforce leaves some people cut adrift; that might work for a business, but it's not a moral position for a country.

5. They clung to made-up pictures of the economy and foreign policy.

Too many Republican talking points about the dire straights of the economy just weren't true. No single number defines the economy. Unemployment is up, but so are jobs. The debt is up but so is manufacturing. Poverty is up but so is consumer confidence.

The same argument applies to foreign relations. America was hated by some and the target of attacks under Bush; it was hated by some and targeted by less attacks under Obama. The Japanese and French now view the US more favorably, the Egyptians and Pakistanis less favorably.  Obama is bad for Israel because he has unfriendly relations with Netanyahu and doesn't take the Islamic threat seriously enough; he's good for Israel because he provided record military support and technology like the Iron Dome. So it goes.

Republicans don't seem to be able to handle nuance. They drag out one number, sometimes a made up number, over and over, regardless of the complex reality.

The Republicans congress is defined by the word "no". They are not seen as a party that unites America. They are seen as politicians who stubbornly cling to every policy, small or large, and never negotiate. They block progress, rather than govern.

We have a country where half the people feel one way and half feel the other way on many issues. It is wrong to insist that every policy go your way. Obama has shown flexibility by conceding some issues and negotiating others. Democrats appear as open to listening. Republicans appear to be intransigent.

Romney was an exception, in that he flip flopped around, making it difficult to know just what to expect from him.

Godwin's law says that, in any argument, the probability of one party comparing the other party to Hitler or a Nazi becomes more probable the longer the argument continues, and that the party that does so automatically loses the argument. When you come to that point, it means you've run out of the ability to work together to actually solve problems. And you've forgotten what Nazism and Hitler really were.

Sadly, both parties did this during the election campaigning. But the Republicans started all the way back when Obama first took office.
2 comments: