My Memory of Us: A Polish Video Game About the Ghettos

My Memory of Us is a game developed by Juggler Games and soon to be published by IMGN.PRO, both of them Polish companies.


The game is set in a fantasy version of WWII, where two kids who are best friends are separated when an evil king (with robots) comes to power. They impose harsh restrictions on one of the kids (the girl) forcing them to wear certain clothing, mocking them, and creating dangerous situations. They only want to play together, and only by working together can the kids reveal their true power.

The game uses cute graphics against black and white dystopian steampunk backdrops of ghettos, garbage, and barbed wire. The story is narrated by Patrick Stewart. 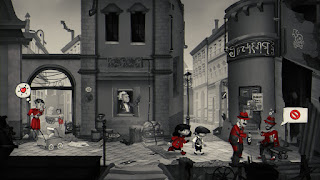 I don't know exactly how the story plays out. It might be an apologetic for Poland: the main characters are obviously the bad German regime and the two kids, Polish and Jewish, who work together and are both victims. Or it might not. You could gloss over that and simply enjoy the game. Apparently, the game was inspired by the real lives of some of the developers.

See all of my movie reviews.

Mission Impossible: Fallout - A very good, but not great, entry in this franchise.

MI's plots are generally unimportant: a bunch of people want to kill a bunch of people, MI agents are the only ones who can stop them, but there are traitors in the CIA who are secretly working against them together with the bad guys. Lots of tropes: cool gadgets, deceptively getting suspects to talk, impersonating bad guys using fake masks, plans gone awry, Tom Cruise dangling off of something high, and last second triumphs.

This movie has a few things going for it that its competition franchises (MCU, DCU, James Bond, Fast and Furious, Transformers, Jurassic Park) don't. One is Tom Cruise, who is a great actor and action hero ONLY when he isn't carrying the entire movie. MI has a nice cast of characters that provide relief from endless shots of Tom running, dangling, and jumping. Another is that they manage to keep coming up with tense situations and action sequences that are at least plausible and thus captivating. And that Tom  does his own stunts and the CGI is minimal, which makes the action sequences more engaging and less like watching cool effects on a computer. Tom doing things while skydiving is really Tom Cruise skydiving, which is pretty cool. Mostly, it's that they take some time to give Tom, at least, some real personality, so that he makes different choices based on conflicting targets of loyalty.

The last one is important, and while MI:F includes this, it doesn't include it nearly enough. They keep trying to muscle in more action sequences and less character time. This may make Marvel fans happy but only makes the movie less engaging and more exhausting. The movie too often jumped from action sequence to action sequence without a breath, which left me just a bit numb. I'm sure there are people who like this; who would complain, in fact, if there were more character sequences. So it's just my opinion. These people also tend to overlook little problems, like how certain people deceive other people when these deceivers are under careful, continuous observation, how certain people could possibly know to be in certain places at certain times to meet certain other people when these other people are doing things purely randomly, and and how certain people would surely have to go through a number of checks before getting to where they got to. I guess I am not supposed to notice those things.

Ant-Man and the Wasp - Marvel, yippee. I never actually made it through Ant-Man because it was formulaic and boring. Perhaps the only thing going for it was that at least the fate of the universe wasn't at stake, which was a nice change.

I'm kind of at a loss as to why I found this one more enjoyable. Not exactly a good movie, but better. The ending was poorly executed, and really the science doesn't make any sense. I'm happy that the fate of the world isn't at stake - just one woman. And I'm happy that the main "bad guy" is someone who has a compelling motivation and who isn't bad at all, just trying to survive.

I guess dispensing with a lot of the back-story helped, as did allowing us to see all of the many ways that shrinking/expanding can be used in a fight. Its lack of ambition made it feel less pretentious and thus easier to accept. It felt like a pretty good television episode. So it was okay.

Jurassic World: Fallen Kingdom - The first one (Jurassic Park) was a classic; the last one (Jurassic World) was okay, but the characters were so flat as to make it feel like a Marvel movie. This one is about the same as the last one, but the plot is dumber and even less original. They need to either let the dinosaurs die or rescue them to some other island, and by the way, someone wants to steal some of the dinosaurs and by the way, someone wants to sell them as military weapons (somehow). It sounds familiar because it is.

The Incredibles 2 - The first was a great movie, marrying Disney with superheroes with some actual adult themes that didn't talk down to kids. This one is even more so. It starts exactly where the last one left off, only they have to deal with the consequences of the damage caused to the city after they stop the first bad guy (exactly like Captain America: Civil War). In order to solve their PR problem, they decide that Elastigirl (rather than the less PR-worthy Mr Incredible) be sent out to do some careful superhero work, which leaves Mr Incredible alone at home with the kids and their new baby of wildly unknown superpowers.

Cue a little male resentment and a touch of 1950s role reversal comedy, but really not too much. Elastigirl really is a superhero as well as a mom, and she does it well, and Mr Incredible proves that every stay-at-home parent is a superhero in his or her own way. Of course, eventually everything has to come to a head.

The plot is good and thought-provoking, but still full of humor and great action. Of course, it's beautifully rendered and well voiced. A worthy sequel to the original.

Breathe - The true story of a British flyboy who becomes paralyzed by polio while in Kenya in the 1950s. He is ready to die, but his wife won't let him and he goes on to travel home, leave the hospital (which never happened back then) and eventually design the first wheelchair with a respirator. His work (and his good friend the engineer) went on to improve the life of thousands of people in similar condition.

It's wrapped up in beautiful scenery and costuming and a true-life love story. It was interesting to watch, although I guess they glossed over some of the less palatable parts of taking care of a paralyzed person. Meanwhile, some parts of the movie went on longer than they should have, such as the entire last half hour where he decides he has finally lived long enough; these parts could have been shorter. I loved and was even surprised by, the scenes in Spain.

Worth watching, although I wouldn't go out of my way to see it.

Midnight Sun - This is a pretty terrible movie from nearly every perspective. It is about a girl with xeroderma pigmentosum.

In real life, this is a non-curable condition whose sufferers tend to sunburn or blister after small exposures to sunlight and who are therefore extremely vulnerable to skin cancer. People with this condition are visibly distinguishable as such, having typically found out about their condition the hard way. They may have special glass in their house windows, but they can go out in daylight with a lot of clothing and extra caution.

In movie life, the girl has movie-perfect skin and never goes outside during daylight. Furthermore, the moment she is exposed to a few seconds of sunlight she develops a brain condition that begins causing her death.

If that wasn't enough of a problem, just let the anemic characters and the predictable, manipulative, and poorly scripted and acted plot do the rest. And, of course, she is going to "hide" her condition from the first (and last) boy she goes out with, because we never get enough of that kind of thing from sitcoms.
No comments: