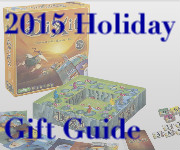 This guide includes games for young and old, for every sex, generation, temperament, and culture.

Whatever you do, and whatever you celebrate, there is no better way to spend a Christmas, Hanukkah, or what have you than together with friends, family, and neighbors with a warm cup of (fair trade) cocoa and a stack of casual board and/or card games.

Remember that the most valuable gift you can give is time. Don't just give your loved ones a game; play it with them. Find or start a local game group and join or form a community.

I hope you enjoy the guide. Remember: the holidays are not only for sharing the warmth with family and friends, but also for sharing with those who have no one else to share with them. Give to your local shelters, hospitals, and so on, because that's the gift that keeps on giving.

Supergirl (TV pilot): SNL did a skit that lampooned what a Black Widow Marvel superhero movie would be like, It simultaneously lamented the lack of female-centered Marvel movies and anticipated that, if Marvel were to produce one, it would be more like 27 Dresses than like Iron Man. Because, after all, women in movies must be portrayed as having to deal with relationships, romance, and sucky jobs at fashion magazines.

Astonishingly, when the trailer to the Supergirl TV show came out, the trailer looked remarkably like the SNL spoof: a female superhero show that appeared centered on a girl with a sucky job at a newspaper with love and self-identity issues (and a little action). Was it really going to be The Devil Wears Prada with a cape?

The answer is: it's not quite The Devil Wears Prada with a cape; it's about 80% like that, mixed with some of the worst writing that modern TV science fiction has to offer. Melissa Benoist is fine as the protagonist, but she has to deal with her tired cliche of a bitchy female boss (nowhere near as interesting as Perry White, or even Miranda Priestly), the tired cliche of a jealous, antagonistic sister, and the tired cliche of having to figure out how to be true to herself. Come on.

Far worse is the nonsense inflicted on us by the action (mild spoilers). One of the enemies (one of many escaped criminals, all originally from Krypton, and all therefore with the same powers as Supergirl) decides to kill as many innocent civilians as possible in the city, so he begins by driving at night on a deserted highway, in a truck, for several hours until Supergirl can conveniently catch up to him. This enemy who had proved to be stronger than Supergirl at their first encounter, is weaker in the second encounter, because why not? While struggling over an item held by the enemy, the enemy simply holds on for a minute while Supergirl overcharges it, rather than do, say, anything else. When the item explodes, while both of them are holding on to it, only the enemy is blown back by the explosion, and not Supergirl, because why not? Of course, the enemy never uses any of his other superpowers.

Supergirl's other "antagonists" are the supposed good guys who don't believe in her until she proves herself. They have kryptonite darts and kryptonite handcuffs which they only use on Supergirl instead of on the Krypton enemies, because ... plot?

It's just ridiculous, from beginning to end. Supergirl fan crushes over a guy, awkwardly tripping over her words and giggling, just like in the SNL parody. Superman does the same in his movies, but we know he's doing it on purpose. Speaking of Superman, we have the same problem with this show as we have with the Marvel movies that feature only one of the Avengers: having established that another hero exists in this world, where the heck is he when the Earth is faced with hundreds of super-criminals?

And speaking of Superman, we neither see Superman (except in blurry profile) not hear the word "Superman" during the entire pilot, despite many, many references to him. We hear "Kal El", "that guy", "my cousin", etc etc. It rapidly became very jarring. I can only surmise that there is some kind of licensing problem with both the image and the word.

I won't be watching future episodes.

Update: Okay, I lied. I watched the next episode. Wow, it is MUCH better than the first episode. The actions sequences now - sometimes - make a little sense. The plot is not - always - ridiculous. The dialog is not - always - forced and unbelievable. It has gone down from 90% annoying to only about 20% annoying.

Supergirl is setting itself up as an oddball superhero story, one in which the protagonist, while possessing superpowers, is unable to function without assistance from a myriad of human sources. It starts her off with her powers, yes, but she requires all kinds of training to be able to use them in ways that don't cause collateral damage and are effective against others of her kind. On the one hand, the fact that they did this for the one superhero show that features a woman is a bit insulting. On the other hand, it's the kind of thing that should be done a lot more often, so it's actually an intriguing idea. It's a superhero show functioning more like a Mission Impossible show.

They also used the word "Superman" several times, so there goes my theory.

Bridge of Spies: Another Tom Hanks/Steven Spielberg collaboration based on a true story. Hanks plays the everyman with a perfected moral sense (he is kind of typecast this way, by now): lawyer James Donovan who acts as defense lawyer in the late 1950s for accused and actual spy Rudolph Abel and then negotiates With Russia and Germany to swap Abel for downed American spy pilot Frances Gary Powers and another hostage.

The first half of the movie is about the trial, in which Donovan succeeds in keeping Rudolph alive. The second half is about the negotiations in East Berlin around the time that the wall is first going up. Everyone does a fine job. Mark Rylance is so captivating as Abel, that it is a shame he disappears for the second half of the movie. The tension is well developed despite the paucity of things actually happening - half a movie, essentially, on a single negotiation. Other tensions - such as the effect on Donovan's family and reputation for publicly defending a spy at the height of the Cold War - are cursorily developed. The fact that the story is true (or true enough; some parts of the story, such as a third hostage and the experience of the downed pilot, were left out) adds to the enjoyment.

Watchable on the small screen.

Ant-Man: I nearly skipped this entirely, but I had time to kill as I was home alone and sick. I abandoned it about 3/5 of the way through. Marvel movies are bad enough with their cookie-cutter plots, great visuals and cool stunts, one-dimensional characters, funny quips, and important objectives of, you know, saving the world (or the universe, or whatever). This movie lacked the great visuals and important objectives. The plot was so narrowly defined and the objectives so straightforward and the plot so cookie-cut, that it felt like it had been generated by a computer. The ending was so forgone that the plot lacked tension. I was bored.

Trainwreck: Amy Schumer is funny, even hysterical, in small doses. At longer exposures you feel like she's recycling material to fill time. The jokes wear thin, and what's left to carry the movie is the plot, which is not bad but not particularly groundbreaking. Amy plays a woman who doesn't understand relationship commitment, while also playing the daughter of a sick man and the sister of a married woman. She meets Mr Right, so to speak, but it's not clear why he would be interested in her. That's actually the excuse she uses to push him away, but it's not given a satisfactory answer.

The movie isn't exactly a train wreck, but neither is it satisfying. It's disjointed. And we get yet another entry in the cliched trope of bitchy female bosses.

At Middleton: Andy Garcia and Vera Farmiga play parents who meet-cute while bringing their children to visit a college. They are both married (to other people), but that doesn't stand in the way of a day-long series of romantic explorations and companionable interactions, the type you would expect to see in far better movies or with younger characters.

Garcia and Farmiga are charming, but they lack a script with any value. They visit all of the romcom cliches and speak some scant sentences that lack any depth and often appear completely out of place. Maybe three or four times it seems like they are going to have a substantive conversation, but it goes nowhere after the first sentence. The events they experience are forced upon them by the screenwriter: They play Chopsticks together. They climb a bell tower. The smoke weed and act silly (always one of my least favorite movie scenes, as it is cheap and boring to watch people giggle and dance around while pretending to be stoned, and all such scenes are always the same and a waste of screen time). They dance in a fountain. They almost kiss several times. They reveal that they are bored in their marriages. Ho hum.

Worse, the lack of discretion they exhibit is unbelievable, and the delusional movie trope that someone can be cured of acrophobia - and, apparently, the need to wear glasses - just by having spent a few fun hours with someone of the opposite sex is insulting to the intelligence. The kids also have some screen time, but their scenes are not significant.
No comments: