See all my movie reviews.

Thor: Ragnarok: This movie has received heaps of praise, and much of it is for the very things that I hated most about it. And I basically hated this movie.

First off, the plot (spoilers, as if): there isn't one. Thor has to escape from something, then he and Loki get lectured at by their dying immortal father, then their sister shows up and breaks Thor's hammer, then Thor gets caught in some arena, has to fight Hulk for some reason - which is pointless, since they are both indestructible and anyway we all know they won't die. Then they escape, and then Asgard blows up and Thor and the rest of the cast is in a spaceship.

It's not a plot, it's a series of disconnected comedy and battle sequences, with zero tension and not a single character worth a damn. Every hero is going to survive, and even if they don't, there is not a whit of emotional interest if seeing them survive or not (and if they are killed, they'll probably just get resurrected again in the next movie). Hela is so unbeatable, that every fighting scene she was in was a complete waste of screen time: everyone else is beaten, whoop-dy do. Why bother filming it? Loki, the one person who at least had some interesting character in his other movies, is now useless window dressing with almost no character at all. There is only one memorable scene in the movie, and it's the only scene in which Loki displays his old trickster character. It lasts for 30 seconds, and then we're back to an endless blank nothing of emotional involvement.

I honestly don't remember a single line of dialogue outside of "We work together!" and the scene I mentioned above. Was the movie funny? I cracked a smile three times. Admittedly, if I had not seen the trailers, I would have cracked a smile four times. The acting is mostly adequate but unremarkable, and the sets, visuals, directing, and so forth are adequate and unremarkable. There is one pretty scene which would have been enjoyable if it wasn't basically a copy of the scene we saw a few months ago in Wonder Woman. Four cracked smiles are not enough to sustain a movie. There is no tension, and there is nothing and no one to root for. There is no bigger message to learn. There is no real reason for this movie to exist.

There is no explanation as to how Thor's hammer is so easily broken. Thor rips out a hammer shaped piece of plumbing that causes as much damage as his original hammer. Huh? Even after smashing into the Hulk and vice versa, the hammer shows not a single piece of wear. Banner falls hundreds of feet onto a solid surface - without turning into the Hulk - and, rather than dying, the scene is played for laughs (he is unscathed, of course). Thor must have lived for thousands of years, yet he doesn't remember that he is the freaking God of thunder and lightning until he cries like a baby because he does not have his hammer to play with - what a puny god. Any one of these was just freaking insane. But mostly, who cares??? The movie is a bunch of unfunny attempts at insult and slapstick humor and Attack of the Clones levels of emotional dialogue. It's like Deadpool, only I hated Deadpool more because Deadpool was also immoral and visceral, which made me feel sullied. This movie was merely a pathetic waste of time.

If there was more than 90 seconds of daylight in the movie, I must have missed them. The origin stories are cookie cutter and uninteresting, the characters are one dimensional, at best, and no one has a relationship or seems to care about anyone or anything other than being cool. With the exception of Amy Adams, who has nothing to do but be Superman's girlfriend.

Ezra Miller's Flash takes the role played by Spider-man in the Marvel movies: wisecracking and boyish, but hardly relatable. Gal Gadot continues to be superhuman, but all she gets to do is bash people and make a few encouraging remarks. Henry Cavill as Superman managed to use his tiny screen time to exude a little more personality than the others. The bad guy, the other heroes, and the mcguffin were forgettable.

As were the action scenes. Look, guys, good fight scenes are not ones where lots of people get bashed repeatedly until one of them finally bashes harder and wins, while everyone else walked away un-scarred. Good battle scenes are ones where the bashing is kept in context and a story continues to unfold. Where victory is not finally bashing a lot harder, but where humanity is exhibited, emotional connections are made or rebuffed, and entirely new things come into play (for example, see The Dark Knight). You recent superhero film makers just don't seem to get it; I mean, you make lots of money, so I guess you're fine. But your movies are emotionless shells. They are no better than episodes of superhero TV shows.

Please: give me stories and characters, not beams of light, wisecracks, things going smash, and guys in suits posing. Lots and lots of posing.

This movie was, at least, not terrible or fatally flawed, so it earns its place among the watchable but forgettable of superhero movies.

Valerian and the City of a Thousand Planets: This flawed, beautiful movie was incredibly creative and generally fun. It has a simple Avatar-like theme of some peaceful creatures, some big bad bosses, cute creatures, and mystery. It also has two cute main characters who look like they are barely out of their teens (Dane DeHaan and Cara Delevingne). Unfortunately, while they act well, there is not a smidgen of chemistry or fun between them. A major subplot hangs around their emotional relationship, written by someone who has no clue how to write relationships. So, although the characters are not exactly one-dimensional, they are not engaging.

The move is still fun, since the main plot - who is attacking the floating spaceship and why? - works fine. It is so inventive and fresh, you kind of wish that whomever is behind the visuals and the bestiary would have been working for the Star Wars production team. A visual feast full of surprises, directed and shot well.

Victoria and Abdul: This flat biopic introduces a topic but doesn't do much with it. Apparently, Queen Victoria spent some of the end of her life in the presence of some Muslim Indian man who was plucked out of India to perform a meaningless ceremony for her, but whom she came to think of as a teacher, despite his occasionally hiding or omitting certain aspects of the truth from her. Everyone around her hates him because he is Indian, not to mention that he is taking time and attention away from things she should be doing.

Judi Dench is a treasure, of course, but Abdul (Ali Fazal) and everyone else puts in fine performances. Costumes and cinematography are adequate. But it's not really much of a story, and the story that there is is not developed properly. For example, the movie introduces a Chekhov gun by having Abdul tell Victoria about a mango early on in the movie. In the middle of the movie, someone brings her a mango, but it is rotten. I'm not an expert filmmaker, but even I know that somewhere near the end of the movie there needs to be another mango. Either Victoria finally gets to eat a ripe one before she dies, or Abdul returns to India and reflects on a mango tree, thinking of Victoria, or something. But no. We never hear of mangoes again; the thread is simply forgotten.

Other interesting story elements were hiding in the screenplay, but they also never made it out. Victoria and Abdul walk and talk, everyone else threatens them (both), and then it's all over. The main characters' changing feelings towards each other are presented, but not well. I was left feeling hollow.
3 comments: 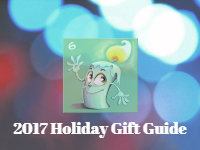 This guide includes games for young and old, for every sex, generation, temperament, and culture.

Whatever you do, and whatever you celebrate, there is no better way to spend a Christmas, Hanukkah, or what have you than together with friends, family, and neighbors with a warm cup of (fair trade) cocoa and a stack of casual board and/or card games.

Remember that the most valuable gift you can give is time. Don't just give your loved ones a game; play it with them. Find or start a local game group and join or form a community.

I hope you enjoy the guide. Remember: the holidays are not only for sharing the warmth with family and friends, but also for sharing with those who have no one else to share with them. Give to your local shelters, hospitals, and so on, because that's the gift that keeps on giving.

Get Candle Quest From The Game Crafter

I think I forgot to mention this: you can get my game Candle Quest, the one and only good Hanukkah game, from The Game Crafter, a publish on demand game site. Thanks to Nadine for some redevelopment that made this possible.

It's the same game with slightly different sized cards and coins, and reworded rules.

Order in time for Hanukkah.
No comments: