Probably the best thing about Endgame is that it's the (almost) last of the first generation of MCU movies (we still have a Spiderman movie, maybe a Black Widow movie, and I'm sure a whole 'other next-generation of MCU movies are in the works). Is it a good movie? No. Is it a good-MCU movie? It's fine, much in the same way that Harry Potter 8 was fine: it does what it is supposed to.

That it broke box office records is understandable since the last movie was a cliff-hanger. Less understandable is its rave reviews, unless the reviews are based on its "must see" quality. Because, even from a Marvel perspective, the movie just barely makes sense, is disjointed, has too many scenes that are just sketches, has too many underused characters, and has an ending that is somewhat anti-climactic. What it has going for it is some emotional impact (a bit), some humor (not all of it good), some flashbacks to previous MCU movies, some nice visuals, and a sense of an ending.

PLOT: Following the last movie where half of the universe is wiped out, the characters are upset. The survivors track down Thanos who has already destroyed the stones so that his work can't be undone, so all they can do is kill him. Five years later Ant-Man is accidentally rescued from the quantum realm but has experienced only 5 hours, which leads him to think that the Avengers can use the quantum realm to go back in time - and space (???) - to very specific times and places in order to steal the infinity stones from the past, undo what Thanos did, and return them to their timelines. Unfortunately, while in the past, future Nebula's presence and memories alert past Thanos to this plan and he travels into the present to destroy the universe and remake a new one that won't try this plan again.

REACTIONS: Let's put a pin onto the obvious time-travel paradox problems, and even the rest of the insane problems for one minute and take the movie as is. This movie takes a little time to show us Hawkeye's family, Iron Man's daughter, and a few other character-relationship moments, which is a little more than we get in most MCU movies and which was nice. There was at least some attempt to deal with the failure and loss of the last movie, although, other than an argument from Iron Man and a sense of purpose from Captain America, these attempts were laughably badly done. Thor's gut belly and indifference was supposed to be funny, but other than the quick visual punch it really wasn't. On the one hand it was nice to see an overweight superhero. On the other, too many jokes were made about him being out of shape.

Now we have to take the pin out, because this movie's basic plot, premise, and how it deals with what happened is just insane:


And that's not even considering the loony ways that time-travel is dealt with, screwing around with multiple timelines with no concept of how to resolve any of the changes. But that consideration is, at least, par for the course for bad sci-fi movies. Also, how does time travel = infinite space travel?

As far as characters go:
As a movie qua movie, the movie exists only to complete what happened in the last movie. It contained no real moral dilemmas, no real character tension, no real insights, no real inspiration or sacrifice (Black Widow's sacrifice was antiseptic and Iron Man's was accidental), and nothing really interesting story-wise other than its utter mangling and refusal to deal with the more interesting ramifications of story that was supposedly occurring around them.

Was it entertaining? If you ignore all of the parts than made my brain hurt, then it was entertaining. I wanted to see how it ended, which is about all one could have hoped for and no more. Infinity War was more entertaining and more satisfying (not that it was good, per se, but it was a better MCU movie). This was just okay.
No comments:

Frankenstein: A New Version of It's Alive from Invedars

Hey guys. News about the game formerly known as It's Alive.

After the first prototypes, two editions of It's Alive from Reiver Games, and two versions of Hanukkah themed versions called Candle Quest by Victory Point Games and on The Game Crafter (still available), the game has been picked up by Invedars, returning to its original Frankenstein theme.

The new version is called Frankenstein and it looks amazing. New artwork, and a figurine and a new events expansion for Kickstarter backers. 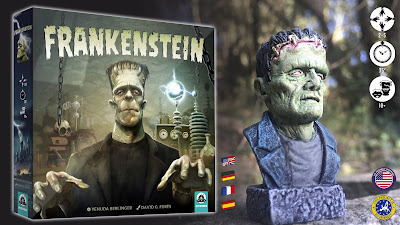 The project is up on Kickstarter and reached its goal in only 24 hours. It is now many times above its goal.

They have already sent prototypes to reviewers for new reviews, for example: