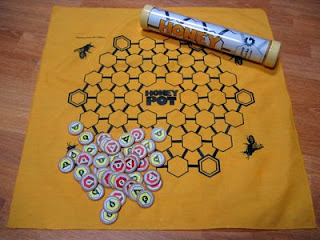 Honeypot is the first game from Gizmet Gameworks, which is run by Marc Majcher. As is typical with new game publishers, Honeypot is also designed by Marc.

Marc gave me a complimentary copy of Honeypot at the last BGG.con, and I neglected to get it to the table until last night.

The board is a hex of hexes with four hexes along each edge, with the center hex missing (36 hexes total).

Each player has 20 disks. Each disk has a number from 1 to 9, and one or more arrows which point to adjacent hexes when placed on the board. Each disk also has a red or yellow side (like Othello pieces each have a white or black side).

On your turn, you place a disk on an empty space.

If one of the arrows on your placed disk points to an opponent's piece, and it's the only one of your pieces pointing at his disk, and the number on your disk is greater than his, you flip your opponent's disk to your color.

Update: Marc writes: That is the case *only* if you're attempting to capture with multiple pieces; a capture made with a piece that is greater than the captured piece always succeeds, regardless of what else is pointing at it.

There are no chain reactions, i.e. flipped disks cannot flip other disks.

The game ends when all the hexes are filled. Add up the values of disks in your colors. Disks placed in one of the six corners count double. The winner is the one with the highest total.

Honeypot comes in a poster tube with a yellow headscarf with the hexes printed on them for a board. The pieces are cheap wooden disks with the faces made from stickers. Rules are adequate and on a single sheet of glossy paper with color printing.

This is not a coffee table game and won't overwhelm you with its beauty. More problematic, the pieces are supposed to be sorted and handed out to each player by background color; one set has white background, and the other has very light gray background. Unless you have eyes like an eagle, you will have a hard time distinguishing between these two backgrounds. The publisher could have done better here.

The elements of Othello are obvious. Your pieces aren't your pieces until they've been placed in a location where they can no longer be flipped. But it's more than that.

You want to drop your high numbers in places where they not only cannot be attacked by other pieces, but where they also turn another high piece as a result, preferably one that also can no longer be attacked. For that, you need to be aware of open spaces near your own space and what disks your opponent has left.

We played what must surely be an aggressive play style, dropping disks right next to other disks and flipping at every opportunity. I'm not sure if that is the only viable strategy. It could be that positioning a few disks at various place around the board might be a better idea. Unlike Go, however, the control you assert by a disk is limited to certain directions, so this may not work. Furthermore, asserting control of a space can be detrimental to controlling the space. If your 4 disk is pointing to a space, your opponent can drop his own 4 disk or a lesser value in that space and be immune to capture (since multiple disks must exactly equal, and not exceed, the value they are pointing at). See update above.

I also wonder if a mirroring strategy by the second player can guarantee a tie. I suspect so.

In any case, I like to be pleasantly surprised when I play a game the first time, and Honeypot pleasantly surprised me. On my first play I found a bunch of interesting decisions to explore, and not simply basic tactical choices, but deeply strategic ones. The game was won by what amounted to one medium disk flip; I'm expecting that an experience player can do much better than that.

I'm looking forwards to a few more games. Only then will I be able to see if it has staying power.