Day 1 of the Board Game Studies 2009 Colloquium

The conference was allegedly scheduled to start at 9:00 with reception and signing in, and the first lecture to start at 9:45. Strangely, when I arrived at around 9:30, the introduction to the conference by Gadi Kfir had already taken place and the first lecture was underway. Until lunch break, all the sessions started and ended earlier than scheduled.

I will tell you about the people I know, or know of: 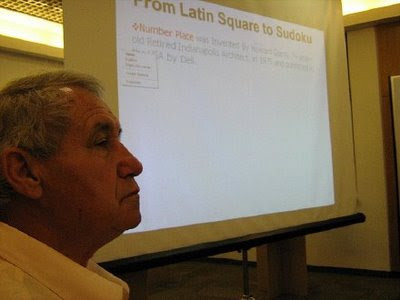 Gadi Kfir, the organizer of the conference, is an expert on Israeli board games in the early twentieth century. 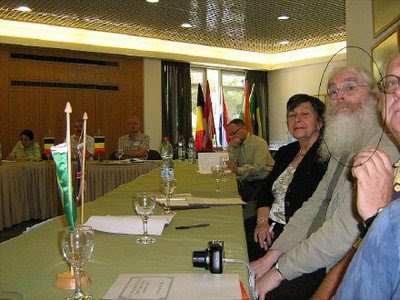 Dr Irving Finkel is curator of ancient Mesopotamian clay tablets at the British Museum, and a leading expert on ancient board games such as Senet and UR. He has also written some books.

Dr Finkel is infamous for being quoted in Time Magazine last year as saying that the last momentous innovation in board game design was acquiring properties in Monopoly. I briefly asked him about this, and he says he's taken a whole lot of flak for it. In fact, that's not what he said; he was highly misquoted. He was talking about race games of a certain type, and he wasn't implying that he was speaking about all the way up to the present day. I could probably get this more clarified, if anybody wants. 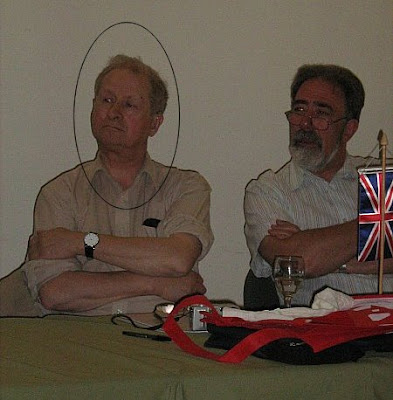 David Parlett designer Hare and Tortoise and wrote some definitive compilation books on board, word, and card games, such as The Oxford Book of Board Games. 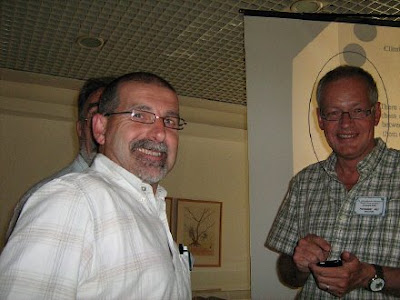 Piet Notebaert organizes a vast library of board games in Belgium and also wrote a book that I can't read that included quotes from me.

Gilad Yarnitsky is the organizer of the Modiin game group, has influenced many in Israel regarding Eurogames, and is trying to publish his first game Space Junk.

Helena Kling, director of the Educational Center for Games in Israel, with game activities and a large game library.

And around 15 other people that I didn't know from India, Portugal, Germany, Poland, Israel, and other countries.

It started early, and I came late, so I missed it.

I missed the earlier part of this session which was on the history of sudoku and similar games. The latter part was about various sudoku products that Rafael and his students have created. (See the wooden toy in the following image)

3. Alda Carvalho (and three other Portuguese researchers), Computer-Assisted Board Games 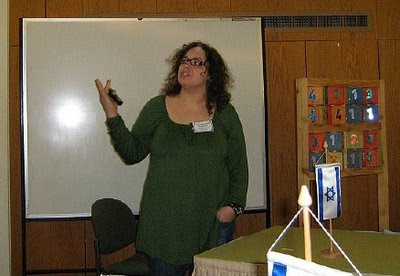 This was on how computers are useful in that they can automate some of the work in board games that people find repetitious or boring, as well as allow certain games with hidden or changing information easier to implement. It was basic, but even so still news to some of the attendees, I think. The Portuguese group appears to be very intelligent, but some of them struggle to make themselves understood in English. 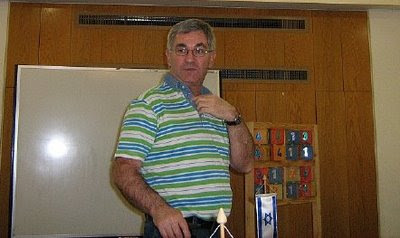 Haim Shafir, Israeli game designer and educator, creator of Taki and Halli GalliHaim talked about how children need adults to play with them honestly and without alternative motives. Since children are less able to separate the importance of winning a game from winning in life, they need games that they have an honest chance of winning; meanwhile, parents need games that won't bore them. He tries to fill this niche.

Then we all played Halli Galli.

When I first suggested the topic, I understood that the attendees weren't too versed in Eurogames. Then I was told that some of them know Eurogames quite well. When I walked around in the morning, I understood that no, really the attendees are not too versed in Eurogames, with the exceptions of people like Piet who catalogs them (but doesn't play all of them) and David who helped invent them.

Out of nervousness, I spoke really quickly. Also, unlike any of the other presenters, I occasionally looked down to speak from my notes, during which some of the people in the back told me later that I spoke too softly. Other than that, I think the presentation went ok. Mine was also a pretty basic topic: what are Eurogames, why they are a movement: the concept that a new board game = new mechanics, what the new mechanics look like, and a bit of BGG statistics.

I fielded questions afterwards, and I'm happy to say I was able to answer them all.

A few people said I was informative. Some said I spoke alright. Piet said that it was nice to hear how an outsider to Europe sees the hobby. I'm pretty sure that what I said was hard to understand by some of the people. At least one still didn't understand what made a Eurogame different from any other board game after the session; I believe he was asking from a classification perspective. Some people indicated that Eurogames don't seem to be reaching or aimed for the masses, and I compared them to the wine industry, where good products trickle down to the lower markets eventually, as they are now doing in Hasbro and Mattel.

Irving said that someone else had lectured twice about Settlers of Catan (only) at previous colloquia; I looked, but didn't see a record of this anywhere. Apparently not all talks make it into the records. The guy from Poland said that he knew about them, but they were way too expensive to buy in Poland. T&E cost 60 EUR, which was half a month salary, and Amazon and eBay don't ship to Poland. 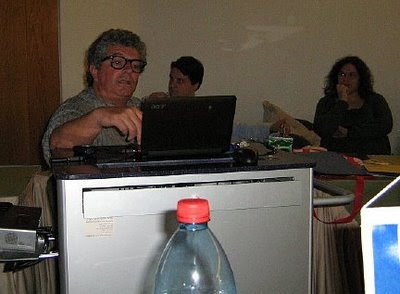 This was the first session that was pretty much what I thought all the sessions would be like: a deep look at a medieval game using notes from manuscripts and a reconstruction of what the game would be like (a game about virtues and vices with a triple headed spinner).

7. Piotr Adamczyk, Board Games in Museum and Education 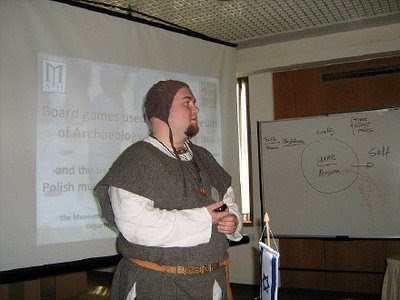 Piotr is probably the lone academic in Poland devoted to board game studies. He only recently started trying to organize a collection and interview elderly about their childhood games. He works in a museum, dressed as a Viking, and organizing classic and ancient game activities for kids and their parents in the museum and at other events around Poland.

He is doing some groundbreaking work, all alone right now. Impressive. 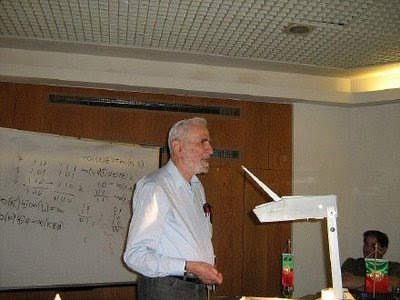 Prof Aviezeri Fraenkel is a world expert on game combinatorics such as NIM games. He demonstrated simple NIM games, how they are solved using binary numbers, and progressively worked his way up to complicated capture games. I understood it, but I think it went over a lot of people's heads.

We then played a capture game on a board similar to Checkers, but with cyclical and acyclical moving patterns.

Three more days to go, although I won't be able to attend the last 1.5 days.

I think you'll find the two talks on Settlers were by Sybille Aminzadah (now Whitehill).

In 2004 she presented "Some Reasons Behind the Success of "The Settlers of Catan" : What makes this contemporary board game so attractive to players?"

Impressive report. Thanks for the photos. Sounds very interesting.