Thoughts and Analysis Regarding the Board Game Studies Colloquia

I thought I had done due diligence regarding the BGS conference, which lead me to think that the attendees only knew about older, classic games, and that they primarily spoke about the history and culture of various games as discovered through archaeology and manuscript research.

It turns out I was sort of right, but I missed the very important word "primarily" in there.

I have assigned 17 topics to the sessions. This is not rigorous study, but a ballpark assessment, especially for the sessions to which I only had the titles. I evaluated 190 sessions.

1. Books: game compendiums or other written sources for games
2. Children: children’s particular role in games
3. Classification: classifying games
4. Classics: international classic abstract games: chess, checkers, mancala, pachisi, dominoes, backgammon, dice, etc.
5. Computers: the role of computers in games
6. Culture: games shaping culture, and vice versa
7. Design: the physical elements of games
8. Education: games used in education
9. History: historical facts about games
10. Math: mathematical analysis of a game
11. Mechanics: the play aspects of games
12. Medieval: any game not a classic, proprietary, or modern (until 1920s or so; this is a gross misuse of the word "medieval", but so there.)
13. Modern: modern American or European games, or similar (Monopoly or later)
14. Museum: game collections, esp in museums
15. Psychology: games shaping minds, and vice versa
16. Strategy: how to win
17. Toys: non-game objects, such as toys and puzzles

Here is the number of times that each topic is covered. One session may cover multiple topics. 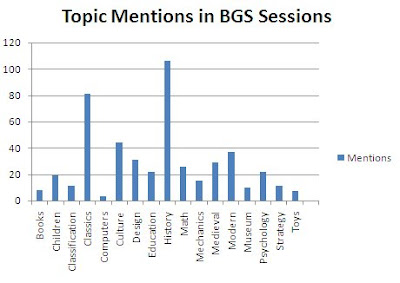 Yes, history, classics, medieval, design, and culture are highly represented, but modern games are also covered frequently: a tribute to Sid Sackson, AH war games, modern variations on abstracts, Settlers of Catan, Monopoly, the occasional mention of a Eurogame, and so on. In each colloquium, there are one or two sessions on the mathematical analysis of abstract games. Computers get almost no mentions.

There are, to my mind, some notably missing topics:
About the Attendees

Many of the attendees have been coming to all of the colloquia, and the age level is up there. A few are younger attendees. There is always a flurry of younger attendees from the host country that wouldn't travel to the conference elsewhere (such as myself).

They are a nice group, though some have some personal quirks (like academics tend to have). If you can write cogently and present a few interesting and original points on any of the above topics, they're happy to hear about it; it doesn't have to be thorough research manuscript information, but you do have to have decent knowledge on what you're talking about.

I was not the only one with a blog, but I was the only "blogger", and so impressed them with my daily updates about the conference. There is a web site for the board game studies journal, but no central location for sessions and abstracts for each colloquium. That should be fixed.

Part of every conference is devoted to touring the conference location. That's mostly what I missed on Friday night and Saturday.