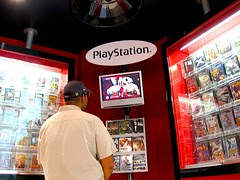 Walk into a toy store like Toys-R-Us, or a general store like Walmart, and you'll find an entire gamut of video game genres but a narrow range of board games.

Board games, even "grown up games", are situated near the toys, the construction sets, and the paint kits. The available games are, for the most part, children's toys. The grown up games occupy a small shelf, and contain a few party games, some light conflict games like Risk and Stratego, maybe some Heroscape, and the old standbys such as Clue, Scrabble, and Monopoly.

Now walk over to the other side of the store where they sell the video games. It's cordoned off behind metal detectors and glass cases. They sell multi-hundred dollar consoles and twenty, forty, or sixty dollar CDs.

A huge wall of dark guns, swords, soldiers, blood, and horror are at eye-level, stretching in either direction. The peripheries reveal civ building titles such as Tycoons and Sims, empire builders, "girls" games, casual bundles, board and card games, sports games, racing games, dance and music games, and so on, just to name a few.

There are hundreds and hundreds of titles in dozens of genres. A great many contain themes and images that would render a board or card game unpresentable in the store. Imagine a board game filled with guns and bloody images, or scantily clad women and men! Shocking! Yet, these immersive and interactive video games have all this and worse, and are on display.

Video games with complicated pieces and rules are available; they require the most dedicated play and hours or days to learn the rules. Board games like this exist, but you won't find a game that takes more than three minutes to learn in the store. Or twenty minutes to play, if certain publishers get their way. Sports board games, racing board games, ecological board games, financial board games, and all sorts of other board games exist and are loved an played by those who know about them. You won't find them in these stores, either.

I hear it's because parent buy games for their kids, and parents aren't going to buy games they don't know. Well, that's certainly not true for video games. Kids come in and buy them all by themselves. It's certainly not true that people aren't playing games about sports, horror, racing, dancing, and other themes. There they are in the video game aisles, and they sell, too. Wouldn't they sell in the board game aisles?

It's a vicious circle. People who want to play good games go to the video game aisles, because that's where the good games are. The store managers don't want to stock newer and better board games, because they think the kids nowadays are into video games. Kids don't play board games anymore. Well of course they don't, if you won't stock any good ones.

If they won't play board games, why are board game sales rising steadily for the last fifteen years, despite you? Why are there millions of visitors to Boardgamegeek every month? Why are so many fantastic games being produced every year, many of which sell thousands, or hundreds of thousands of copies around the world?