Rachel foolishly scheduled a Skype interview for 3:30 pm, which meant that we had to be at our destination and connected to the Internet by that time. Our flight was scheduled to leave at 11:30 from CVG and arrive at 1:30 in EWR (Newark). We reserved a service to take us to NYC from the airport - more expensive than AirTrans, but hopefully faster. All told we should have arrived at our destination at 2:10 or so.

I'll give you a moment while you clean up the coke you just snorted out of your nose and onto your keyboard.

I should have know what was in store for us when I saw this at Continental's boarding counter: 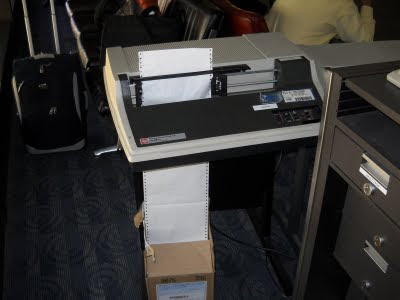 Our flight was officially delayed by 1/2 an hour, and unofficially by an additional 1/2 hour. We left at 12:30, scheduled to arrive at 2:30. The delay was due to storming in Newark.

There's no storm like a storm experienced in a small airplane. The plane rocked back and forth like a boat in choppy water. We descended through clouds, descending and descending with nothing but white outside the window. I was sure we were going to land and still not be able to see anything. But some visibility did return at about 1,000 feet.

We disembarked at 2:45, with only hand luggage. Our driver was quite good, and we only had traffic when we got into Manhattan. Breathlessly, we arrived at out destination at 3:25, paid the driver, and off he went. The apt number was E. The numbers on the door read 1 to 10.

Luckily Rachel had her cell. Turns out that she wrote down the wrong address: not 20, but 201, and not apt E, but apt F.

We walked the two or three blocks, arriving at 3:45. Luckily we were able to contact the interviewers during the walk.

We davened at Lincoln Square Synagogue (which is in the process of building a new building one block south from its current location). We stayed with, and ate with, wonderful families. Dinner was with a couple and their three wonderful children, with whom we sang and Rachel waltzed during dinner. After, we stayed to play Bananagrams and Anagrams.

I was stuffed. I got even more stuffed the next day when I ate at three kiddushes at shul, two with kugels and cholent. And then even more after another incredible meal.

Thank you for hosting us, wonderful families of New York.

Rachel's plans had canceled on us, so I contacted my good friends Yitzchak and Avigayil at the very last minute to "do something" on Saturday night. I poked another friend who didn't answer me back, but maybe I'll get to see her Sunday morning.

Saturday night, while my friends were scrambling to get the family in the car and drive in from Teaneck, I searched around for something that still had tickets available. We missed out on a lovely looking Irish dance thingie, but managed instead to score tickets to a production of Shakespeare's Pericles at American Theater Actors (54th and 8th). We had no idea if it would be any good.

I enjoyed it, but it was amateur theater. Of the cast, some of them were not very good, while others were quite good (Pericles was good). One was a substitute for this evening, and read half of his lines out of a copy of the play he held. There was no production or costuming to speak of.

The real trouble was the play, not one of Shakespeare's best plays: misogynist, confusing, rehashed plot materials from his other plays, and no standout lines that I can recall. Still, I enjoyed the night out, some of the acting was good, and I could usually follow what was going on. 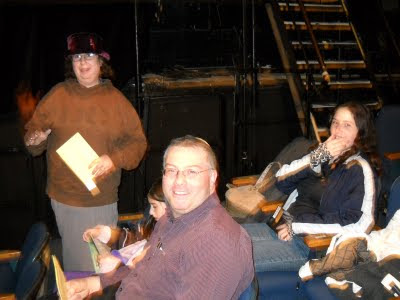 On the way back, we walked past Lincoln Square. 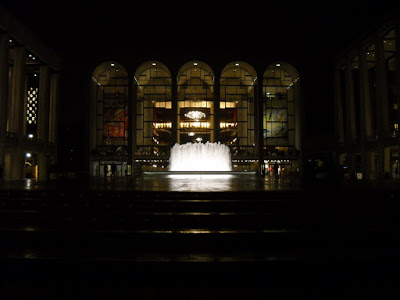 We then spent an hour trying to find something kosher and open at 11:30 pm in the area. We finally had some H&H bagels at their warehouse store on 80th and Broadway; no place to sit. But darn good bagels. They deliver internationally.

Oh, Saturday night stops at H&H on the way back to campus were a highlight of college in NYC. Of course, we were typically there at 2:00 AM.

I thought I could would be able to find some downtown, but I couldn't find any place to buy them near the kosher stores on Broadway and 37th.