A Revolution With Momentum 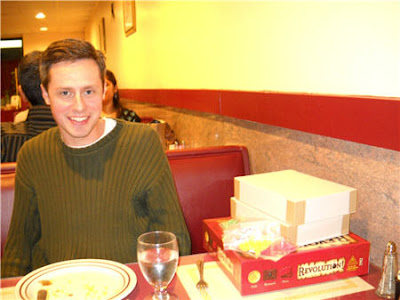 Philip is the designer of Revolution!, now published by Steve Jackson Games. Here's the official site and BGG entry. His blog, Starting a Revolution, documents the trials and tribulations of getting his game to market.

Revolution is a pretty looking Eurogame. It's a blind-bidding area control game. There are seven locations on the board, twelve different things on which you can bid each turn, and three different types of currency (force, blackmail, and money).

Each round, you secretly allocate your coins to the twelve things. Each thing is resolved in order, with the player who allocated the most for the thing getting the thing: one or more coins, cubes in a location, points, some special action (such as swapping two cubes on the board), or (usually) a combination of several of these. If two players tie for a thing, no player wins the thing. All bids, win or lose, are lost to the bank. At the end of a round, pick money until you have a minimum of five coins of any currency.

Continue until all locations are filled. For final scoring, the player with a simple majority (plurality) on a location gains all the points for the location; other players get nothing. If there is a tie, no one gets anything.

It looks great, and I'd probably enjoy it. My game group is not big on blind bidding, but we love area control. I was trying to think how to change the bidding to something a little more open, such as worker placement or card play. It should be possible.

Philip also showed me two prototypes. The first was a worker placement game set in ancient Palestine, with mechanics partially based on the Caylus building mechanics. It looked interesting, if a little divorced from the theme. The second was a card driven area control game of influencing King Henry, which looked exactly like the type of game my group would go for. I hope I can get a copy to play-test when it's ready.

He's got yet another prototype under consideration at a publisher, and it also sounded good. If these games live up to their potential, Philip is going to make quite a name for himself in the Eurogame designer world.

I was going to give him a copy of my game, but he already had a copy; my publisher had sent him one.

Great account of the mechanics! I like the sound of that to go with the shiny bits I've seen on the back of the box in my FLGS. I'll be looking into this game in more detail. ;)

No problem. Hope you enjoy it.