When to Not Give Up 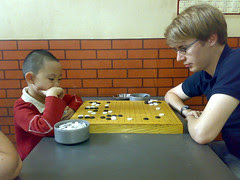 One of the major lessons of Go is when to give up. Playing in an area in which you have no hope of acquiring is not merely futile, it is counterproductive, because a) you lose more points in lost stones and b) each play represents a lost opportunity to play elsewhere.

In other words, the lessons Go teaches us about giving up come with several caveats:

1) That we are absolutely sure that what we've given up on is totally lost
2) That trying anyway is counterproductive, or even more harmful
3) That the energy spent on a lost cause is robbing us of resources better spent elsewhere that will actually do us good

Item number one is the hardest one to wrap your head around. All of the inspirational thinking in our world teaches us exactly the opposite. The game isn't over until it's over. You never know what you can do until you try. Great geniuses can accomplish what others consider impossible.

The funny part is that they're right. The game isn't over until it's over - that's because you have nothing better to do with your time anyway, so playing it out and hoping for a million to one chance doesn't represent any lost opportunity. You never know what you can accomplish until you try - because the evaluation about what is absolutely lost is often premature. Accomplishing the impossible - because some people don't seem to follow the rules.

I find these latter people to be the most annoying, actually. I have a friend who took various illicit drugs in high school and college while maintaining a straight A average and doing all sorts of extra curricular activities. He slept around without causing any major social problems or contracting any diseases. He smokes one cigarette a year and has never gotten addicted to anything.

So sue me. I still don't condone cigarettes, drugs, and promiscuous sex just because some few weirdos can beat the odds. Naturally, this person thinks it was a great experience and doesn't think fooling around with these things is as bad as others make it out to be.

Another seemingly blessed person is Scott Adams, creator of Dilbert, who claims to be the first person to ever recover from a debilitating speech problem, from which no one else has ever recovered, by sheer force of will. In previous posts he talks about all of the other odds he has overcome, despite everyone around him telling him that he can't do it. He always does.

Is he an inspirational story for the rest of us? Or a freak, whose inspiration will lead others into attempting, and then failing, the impossible?

Although I would like to condemn him to being a freak because I don't like his bloated ego, all of his persistence stories never actually violated any of the three above rules: either what he tried to accomplish wasn't really impossible, or his attempts didn't make things worse, anyway, or his efforts didn't represent a waste that could have been better used elsewhere. He tried various techniques to regain his voice, because why not? And he succeeded.

One other point needs to be made regarding giving up: often people fail at things simply due to lack of persistence. 99% of people won't accomplish X because they get discouraged by the fact that 99% of people won't accomplish it. The 1% who succeed are sometimes the 1% who are willing to continue after the attempt becomes less popular and then find themselves with more space on the playing field. The 99% self-selected themselves to failure.

As to when to really recognize that something is not worth the effort because it is an absolutely lost cause: either you really know it to be true from experience, or you are happy to direct your efforts elsewhere, regardless of whether it's true or not.

I tried Lexicon again with my daughter and reconfirmed my belief that word based card games are simply too easy, as it is very easy to meld words from a handful of letters.

I also taught Go to a non-gamer friend. She bemoaned her lack of understanding what she was doing throughout the game. I told her that that was normal. We will see if she asks to play again.

I am working my way through the Go based anime series Hikaru No Go via the magic of YouTube.

Baby Blues is becoming a favorite of mine for board game related linking. In the latest, Hammie explores the nature of cooperative games.

The Huffington Post posts a nice article about a parent finally cluing in to the positive aspects of video gaming. (via Raph)

Sinister Dexter asks about museums of gaming and gets a batch of wonderful replies. Check out the link to see a dozen links to museums or museum displays on gaming around the world.

I know this wasn't your overall point, but it's important to Go. A hopeless (or nearly hopeless) local situation should be temporarily abandonned. You may be able to use it later in the game as a threat to gain some other advantage. If you play it out until it outright dies, then you have no threat left. The Japanese term is "aji".

ekted: absolutely, and that was what prompted me to think about what really was the lesson here.

If your opponent responds to each move you make when you continue a futile attack, then you haven't necessarily lost anything in lost stones or in the opportunity to play elsewhere, because while you gave them a stone, they also played a stone inside their territory (and under chinese rules captured stones and playing in your own territory don't matter). However, in addition to losing your own good aji (aji keshi), you also strengthen the opponent in that area of the board, and use up your ko threats, and, if your opponent ignores you and plays elsewhere (tenuki), you have lost sente (the initiative). Even with all that, it still could be worth it to make a desperate attack, if you're losing. The go proverb says that a rich man should not pick quarrels, but by implication a poor man may have to.

I really like what you said about it being important to know when to give up. There are too many options in life, that it would be silly to waste one's time on something that seems hopeless to achieve. This applies to GO as well as many aspects of life. After all, isn't life just a form of game?

P.S. You sure have a lot of spam blogs on games.