Guy Gavriel Kay is one of my favorite fantasy authors. I got to hear him speak briefly about his latest work, Ysabel.

He writes long and well-researched books with juicy detail and well-drawn characters. Sometime his books have extended downtime sequences, but mostly they are engaging. In fact, despite many other lofty intentions for his works, he said that his main purpose in writing is to keep you reading until 3 am.

Of his books that I've read,my favorites are Tigana and The Lions of al-Rassan. I've also read a number of his other earlier works. I haven't had a chance to read any of his books from the last decade or so.

Today's lecture was in an ongoing series of February lectures of authors in Toronto. This was the only "speculative fiction" event, and Guy appeared together with another writer, Nalo Hopkinson. Nalo read a passage from her latest book, while Guy simply discussed what went in to writing Ysabel. 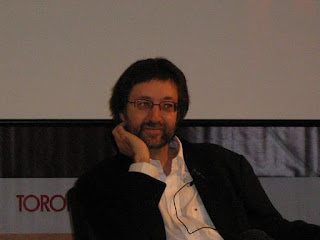 Guy is very funny and has great presence. He started off by noting that this is the second time he has been sent on a book tour through Canada in February while his publisher has gone off to the Caribbean.

As for Ysabel, Guy noted that it draws extensively on some little known but important history in Southern France, namely the meeting of the Roman and Celtic empires over two thousand years ago. It conveys themes about the past meeting the present; about the differences in attitudes to childhood then and now; and how personal and world histories intertwine.

Guy said that he adds fantasy elements to his books simply to prevent someone from reading the book and saying "Oh, that's just a book about the period so-and-so," which would cause a distancing from the narrative.

I asked him what he thought of the term "speculative fiction" versus "science fiction" or "fantasy", and he said that all he really wants it to be called is "good fiction". 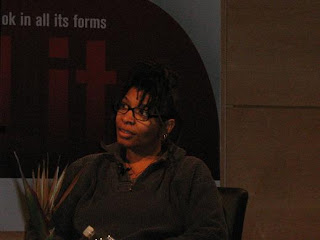 Nalo was also charming and her book sounded lovely.


Last night I went to a play which was fairly bad. Well acted, but very poorly directed and scripted, in my opinion. And tomorrow morning we're off to Tampa.

Have you read the Sarantine Mosaic? That's my favourite of Kay's books and one of the best fantasy or historical fiction books I've ever read. Particularly the beginning of the second part, Lord of Emperors, where Kay spent, what, 200 pages going back and forward, explaining what the different characters did on that one crucial day. Amazing!

He's also one of the most steady authors I've read, all his work has so far been worth reading, especially his historical fiction (Fionavar is good, but I prefer Kay's other, less Tolkienesque work).

I started with Song of Arbonne and then Tigana. I'm glad because I don't think Guy had developed his full strength as a writer yet by Fionavar.

I missed Sarantine, but want to pick it up.

Coincidentally, I'm reading Ysabel right now. I second the recommendation for the Sarantine Mosaic. Simply tremendous stuff. I also enjoyed The Last Light of the Sun.

Did he say anything about the Al-Rassan movie? IMDB lists it coming in 2008 but that's all I can see about it.

I would have asked, if I had known. Out of an audience of maybe 70 people, my question about "speculative fiction" was one out of only two questions asked. And I think the other was a comment.

From his web site it looks like it is in the "option" stage. Last Light of the Sun is also being adapted for "the screen" by GGK himself. (That book is about to be published in Israel.) www.brightweavings.com

"Ysabel" - sounds like the next title from Ystari Games! :)

Tigana's my favorite too - that's the one my wife got me started on. I hadn't heard about an Al-Rassan movie - maybe I'll have to re-read that one soon!