A Kit an' Kaboodle from McNeill Designs 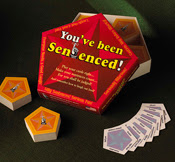 I gave the game You've Been Sentenced a brief mention and link on my blog a few weeks ago. As a token of thanks, the publisher McNeill Designs told me they would send me a copy of the game to review. I just got it.

But not only did they send YBS, they sent all five new YBS expansion sets, as well as another new game of theirs, Reader's Digest Nation Word Power Challenge: Set 1. That's their entire catalog, pretty much, except for a Go Fish-like kids game Twisted Fish and a family chore assignment spinner called Wheel of Chore-ture.

YBS is a sentence forming game. It consists of a boatload of pentangular cards, each side of which hold a word and a value. Each round, you get ten cards and have a short time in which to form them into grammatically correct sentences. A player can challenge your sentence and the other players then vote on whether or not to accept it.

You get the point value of your words, plus a bonus for forming your word first and another bonus for using all ten cards. Rinse and repeat up to 200 points.

It actually looks pretty good. One of the major advantages of a game like this for me is that it doesn't require writing so can be played on shabbat.

Along with the already voluminous amount of cards in the original set, I also have all five current expansion decks, each of which adds an additional 80 cards around some theme, such as sci-fi/fantasy, cooking, entertainment, etc...

A little plus: McNeill Designs donates part of their proceeds to Success Won't Wait, a non-profit literacy program. I don't play party games too often, but I'm looking forward to giving this one a try.

The Reader's Digest game is really just plain old Go Fish. The box claims to be Set 1 of a series and comes with three decks of cards. Each deck contains 64 cards, 4 cards in each of 16 sets, and is its own game of Go Fish around a certain theme.

The quirk is that each 4 card set is a word from one of Reader's Digest's Word Challenge columns, and the four parts you need to collect are its definition, origin (e.g. Latin root), synonyms, and Fill in the Blank, the latter of which is a sentence with a blank where the word goes.

I'm not going to play this, but some grade-schoolers might get enjoyment from it. I king of think they would learn more playing YBS, and one of the bonus card sets for YBS is a Reader's Digest Word Challenge deck, anyway.


Shabbat's coming, and I need to get going. See you on the other side. And then Sunday, I'm off to Canada.