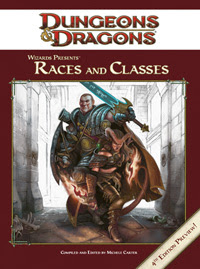 The full books aren't yet available, but Wizards of the Coast has released some soft cover previews of parts of the new system. Slashdot reviews the books on classes and races as well as monsters and worlds here.

Remember that one of the other major features of 4th edition is going to be its integration by design into online play.

Gamers With Jobs reviews the upcoming Risk: Black Ops, a new version of Risk with objectives that can drastically shorten the game time.

Webomatica lists the board games that scarred him for life and the lessons learned.

The Sheboygan Press was so excited after doing it's piece on why everyone should vote Sheboygan onto the new World Monopoly board that it tried to find other games that also feature Sheboygan. It found some, including The Creature that Ate Sheboygan.

You can no longer play cards at the YMCA in Waukesha, Wis, following objections from the Christian Civil Liberties Union.

The Game-a-Day Journal is a blog where the author produces a new minimalist Flash game every day. With each game, he explores how the game explores an experience or question about life.