One night of music was in Tampa, and was described in an earlier post.

Hugh's Room is an awesome folk and blues music club in Toronto. The list of performers who have played there is a Who's Who of folk music. Look at the calendar on their site to see who's coming up.

What's most amazing is that a) there's no smoking, and b) the prices are usually really good. We paid $15 each for a night of great music, although sometimes it can climb to $30 or $40 for some performers.

Last time we went we heard performances that blew us away. This time wasn't up to that level, but was still a great night out. 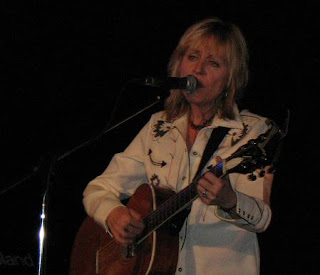 Up first was Lori Yates. Lori is a solid country and folk performer with a string of good songs that she sings nicely. She has a great on stage personality. She just released her 6th CD, The Book of Minerva.

While good, sometimes very good, I wouldn't call any of her songs truly exceptional. Don't get me wrong, I could listen to her perform every week and would be happy to have her sing at my party. It just didn't blow me away. 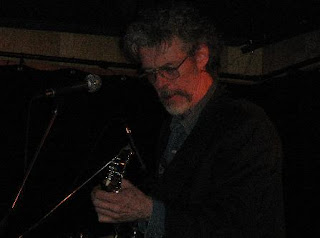 The best part of her performances was her accompanying guitarist, David Baxter. He is also the arranger and producer (?) for both of the artists who were performing this night. While Lori played straight rhythm, David played the melody an did the solos. He was exceptionally good. I wanted to hear him do his own solo set. 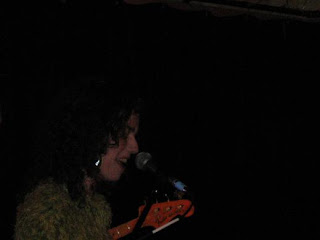 The second performer was the young Treasa Levasseur. She plays uptempo blues rock with an accompanying band and a gospel influence that can only come from a (self-styled) lapsed Catholic. She's small and thin, but belts out clear and confessional songs in a powerful voice full of love and anguish.

Nearly all the songs were from her new album, Not a Straight Line. She sounds something like an angry Eva Cassidy. It wasn't exactly my style, but it was enjoyable.

Palace of the End: I saw this listed online and passed over seeing it, but Rachel got us tickets on the recommendation of someone else. I had very low expectations. The play was by a Canadian on the subject of the Iraq war, told through three voices.

I know Canadians, and amateur far-left bleeding-heart Canadian playwrights are not known for their balance regarding American politics any more than they are for their impressive screenplays. So I expected to be upset. And, of course, I was biased. But the play managed to be even worse than my expectations.

The acting was fine; it was the only thing I don't have any complaints about. Just everything else. The screenplay was unbelievable.

The history of the characters squeezed into the half hour alloted to their monologues jumped back and forth in behavior in an unbelievable manner. It was supposed to give a sense of internal conflict, but instead gave a sense of confusion, and a pandering to a sense of balance (without actual balance).

Emotions from the actors jumped back and forth in an instant from paragraph to paragraph, again quite unbelievably.

The play incorporated real-world events that happened to real-life characters, but the dialog was made up to suit the needs of the playwright as were many of the facts. The characters said things that made them suddenly obviously good or bad in ways that characters don't. And somehow, the American government was to blame for everything, no matter what happened. I'm fairly sure that the real-world versions of these characters would strongly disagree with their portrayals.

First play that I actually walked out of in the middle of the production.

As You Like It: This was a phenomenal professional production of Shakespeare's classic comedy. The acting, the direction, and the production were all not only first-rate, but intelligent and interestingly arranged.

Through careful direction, the actors were able to convey many extra emotions and interactions through non-verbal means. The comedy was just enough to be both warm and funny, and the love portrayed with delicate poignancy.

Chaim's Love Song: I tried to lower my expectations after having just seen As You Like It, since this was being performed by an amateur theater group.

The story is about an old Jewish man who strikes up a conversation with a young American Irish newlywed woman. Through a series of flashbacks, he recounts many events in his life and the lives of his wives, children, and friend. She tells a but about her new husband an how difficult she finds it to talk to him.

In fact, the production was amateur, but the play was done very well. Much of the first part of he script includes Jewish jokes you may have heard. In fact, the lines were all delivered as if they were being delivered inside a Jewish joke, which was irksome. The delivery didn't have to be that way, however.

Some of the younger actors couldn't act, or weren't directed properly. But the older ones carried on quite well. As the play moved on and the story elements began to come together, the play became pretty engaging. It was more than I expected, and quite worth the attendance.