Tampa is Great, Once You Get Out of It

The Tampa Day's Inn is clean and comfortable enough. If you're planning a cross-country trip and just want a bed and breakfast, motels like Day's Inn are good enough.

There was something unusual about the breakfast at this Day's Inn: it is nearly entirely kosher. Quite by accident.

One expects a few kosher things at an American hotel breakfast: cereal and milk, fruit, yogurt, and some drinks. Bowls and spoons won't be kosher, but if the food is cold it's not a problem: not ideal, but doable. So you just have to avoid bacon, eggs, breads, pastries, unknown drinks, cheeses, fish, and so on. Some of these may have some kosher basis, but they must generally be avoided.

Thus it was a surprise to see the following at breakfast: cereal and milk - kosher. Blueberry muffins from a box - kosher. Quaker oatmeals. Fruit. Coffee and tea. Bagels. All from boxes or bags marked kosher. All dishes and utensils were disposable. And kosher syrup, cream cheese, butter, margarine. And so on.

In fact, there was nothing not-kosher in the entire place. They even had kosher waffle mix which you could pour into waffle irons; stricter people probably would have avoided these because who knows what someone could have put into a waffle iron, but I'm pretty sure they were used for nothing but waffles.

Nevertheless, although it was cheap, clean, comfortable, and weirdly kosher, the place is situated on the intersection of two busy highways. It is crowded and noisy with other low-budget travelers, and it is in a bad and ugly neighborhood. In other words, hardly the stuff that vacations are made of.

Rachel's University was paying for our trip until now, so we hadn't spent any money. We had arranged to stay until Monday afternoon. Since this was a place to stay, but not really nice, we decided to look for something nicer for Sunday night. And we found it: The Resort and Club at Little Harbor.

The Resort is not that expensive (through various online sites) and it's several miles south of Tampa. It's beautiful. It's situated between a harbor and beach, with heated pools, outside games, huge rooms tastefully decorated with everything including a microwave. Simply gorgeous, out of the way, and quiet. It's like we're in another state.

As I swam in their outdor heated pool and sat in their outdoor jacuzzi, I saw the most beautiful rainbow arch across the sky, solid and brilliant.

Around the Day's Inn and along many of the roads near USF are trailer parks and other distressed living areas. There are also handfuls of flea markets. The biggest one is called the Big Top Flea Market. It has over 1,200 vendors/stands.

The vast majority of these are dollar store equivalents and other assorted trash. But a big place like this had to have something nice tucked away somewhere. It has lots of nice books at $1 each, some really gorgeous antiques mixed up with thousands of trashy ones, and sports card stands. Some of the latter carried CCGs, but none carried Magic. One carried Jyhad. There was also a stand with some beautiful Vietnamese clothing.

We stopped in here on the way out of Tampa to Hillsborough River State Park. Outside of Tampa, it is a treasure of forests with drooping moss and a river which winds through it. The hiking is easy and the paths are spotless. It has one drawback: swarms of mosquitoes.

The park gives you only a single page photocopy of a rough trail outline when you arrive. No information about the park, plants, animals, etc. Furthermore, there are no signs or trail markers on the trails. It's not hard to see that there is a trail, but no indication of where it is going or which way is the exit. 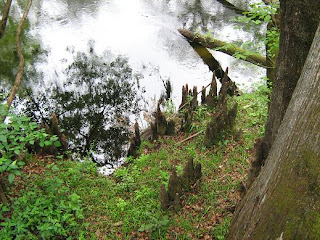 Stumps of trees on the riverbank 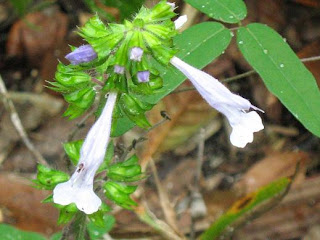 One of the few flowers blooming at this time of year 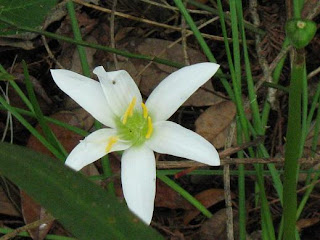 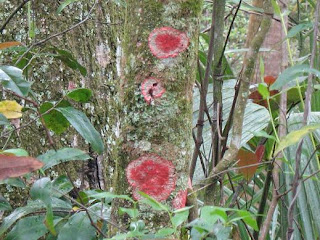 Red lichen on a tree 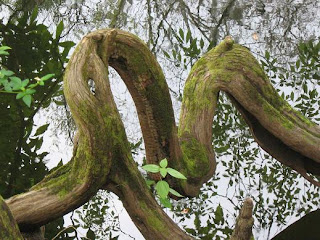 Twisted roots in the river 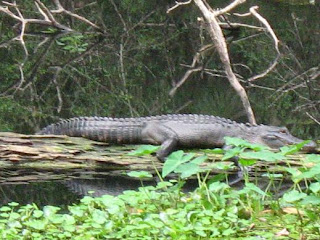 An alleygator sunning in a brief spot of sun 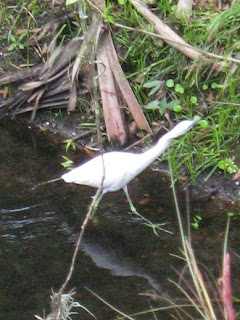 A crane looking for his alleygator 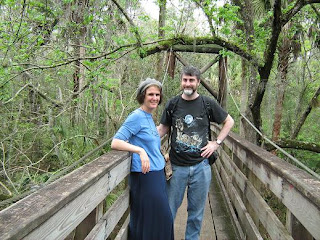 Rachel and I on a bridge

Our last stop before retiring was some Southern Rock and Blues at Skippers Smokehouse. On set were the opening band Raiford Starke Band and the main set Paul Thorn.

Skipper's Smokehouse is a rambling series of roofs, bars, and stage. The food smelled good (not kosher). It was lit up with lots of different types of lights and hand painted signs. While a blues establishment, it seemed more like a Hippie establishment. The attendees were split between those who looked like Hippies and those who looked like your basic Southerners. One thing of note, however: of the 400 or so people there, they were all American white. No blacks or otherwise foreign looking people in the audience. 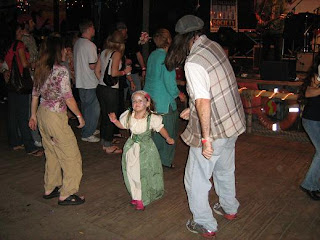 The RSB was something between southern and psychadelic. Raiford himself was a good guitarist, but their songwriting and music arrangement was dull and uninspired. They were unable to establish a relationship with the audience, even though the audience brought them back for an encore or two. 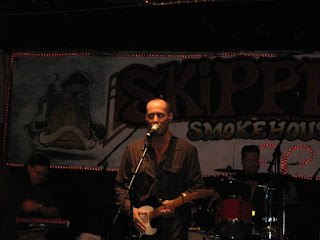 Paul Thorn, on the other hand, was a great singer-songwriter in Southern Blues Rock. He was witty and engaging, with music and arrangements that should have earned him hits, if they haven't already. Worth catching if you like southern rock.

I can usually go about 2 days on fruit, salad, and junk food. After that, I get anxious for a real meal. A good source of information on kosher restaurants is http://shamash.org/kosher/. If there's nothing local, Noah's Ark in Teaneck, New Jersey (http://www.noahsark.net/block_tm.asp) can send meals by overnight courier.

Thanks, David. I had checked Shamash, and they listed four kosher placs, but none of them were actual and under hasgacha in reality at this point in time (maybe last month, and maybe next month).