I hope it's not too disconcerting to read about games on a game blog. I haven't played any in a week or so, until today.

I did some game design one afternoon last week. I'm working on a game about education. It has public and private schools, specialized student skills, good and bad teachers, good and bad neighborhoods, good, bad, and no school programs, zoning and busing, lobbyists, changing school admission and school board criteria, scholarships and awards given at the end of twelve years of education.

Actually, it's a rather depressing game. I'm not sure whether to make it a cooperative or competitive game, or something in the middle. I'm not sure what the goals of the game are, yet. I hope I can get my group to play-test it.

In the meantime, I got in a two-player Puerto Rico game this afternoon with Rachel. When I travel, I dissect Puerto Rico and take everything I need in a ziplock sandwich bag. 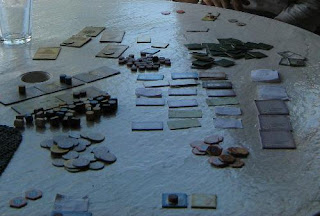 Of course, we also play with our favorite specialized buildings:

- Assembly Line (instead of Small Market): All your production buildings can hold an additional colonist.

- Small Fashion District (instead of Construction Hut): Trade indigo at +2.

- Commodity Exporters (instead of Office): Ship indigo or sugar at +1 VP.

- Discretionary Hold (instead of Large Warehouse): a) Store up to 3 barrels. b) place barrels onto full ships for +1 VP; each full ship can hold only 1 extra barrel.

- Large Business (instead of Harbor): a) -1 cost to building. b) +1 VP during Captain phase (not per goods shipped).

- Large General Workhouse (instead of University) w/2 circles): produce any goods with the corresponding manned plantations.

- Private Boat (instead of Wharf): ship any four barrels.

In addition, you may move one of your colonists onto Hospice when you buy it.

A really broken building you discover within a play or two. The subtly powerful or underpowered ones can take several plays. We've played with these building hundreds of times now, so we put them through the ringer.

Recently we began to suspect that Commodity Exporters was overpowered for its price in a two-player game. This game cemented that suspicion.

Rachel took it early in the game (Indigo, Sugar, Commodity Exporters). I had more money and more control, I took an early Large General Workhouse and a Large Business. I nearly took Factory, but my cash situation was already good - I had monopolies on both Tobacco and Coffee for much of the game. So I let Rachel take it.

I don't think I made any mistakes, but neither did Rachel. She was still ahead a good 6 points in shipping near the end of the game, even with my blocking boats. And I wasn't that far ahead in building. Eventually I had enough to get a second big building that she couldn't, but I couldn't man it unless I let the game go another round.

In the last round, Rachel had to choose between letting me ship and gain around 6 points on her in shipping, or let me Mayor and gain my big building. She let me ship, and I ended up ahead two shipping points. But when the dust settled, she was two points ahead in building points. And she ended with goods and money where I didn't. So she won on the tie.

Another exciting Puerto Rico game. And I'm going to have to tweak Commodity Exporters.