What Defines a City?

Imagine that you had to rebuild your city or town. What elements would you need to add so that the resulting city felt like "your" city? 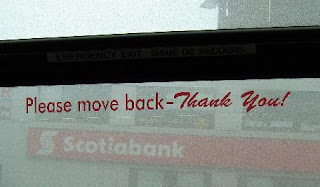 Change the design of the streetlights, the taxis, the street cement, the garbage bins, and the traffic signs, and your city is no longer the one you started with. But Toronto would still be Toronto without the CN Tower. Some might say no; but New York City is still New York City without the Twin Towers.

A town is defined by its daily elements, not by its tourist attractions.

Residents and visitors interact with the mundane elements of a city far more than they do with the "features". The landmarks bring in tourist income, sure. Some attractions are even useful to a city's residents, like an art or history museum. But pleasant streets, lights, garbage bins, signs, and services do more for a city than an attraction can.

My eye always finds the mundane elements of a city when I travel. Who designed them? Why? Do they work? They're what makes the city.

What Defines a Company?

Following this line of thinking, your company is a city that attracts visitors and inhabitants. Too often the focus of a company is on special attractions: special discounts, special offers. Perhaps at least as much time should be spent focusing on the mundane: Does the mail get to the customer? Are the products easy and reliable? Is the customer service helpful?

Both special attractions and basic services bring in money; but some money is just passing through looking for the next best attraction. Better money wants to live there and keep on giving.

What Defines a Game?

The same can be said for game design. The special attraction might be the big boss, the mousetrap, or the funny card. But these don't make for replayable games. You've seen it, you laughed, what's next?

If you want your players coming back, put effort into making the mundane elements of your game enjoyable: the moving, the turns, the decisions. Enjoyable mechanics provide constant challenge and fun every time they're played.