Strange Items Refered to in My Mother's Memoirs

My mom was born in 1938 in New York City. I've been reading through her memoirs. 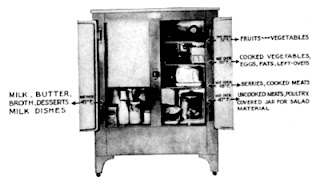 This is what they used before they had refrigerators. My grandmother always referred to a refrigerator as an "icebox". Blocks of ice were sold from ... 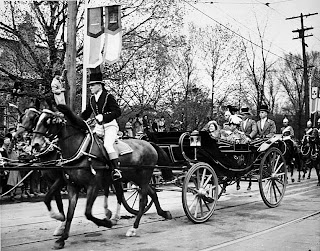 You've see these in lots of movies about early times, and they still have a fleet of them in New York for impressing your date. In the 1940s, these were still common transportation along with motorcars.

Many traveling carriages were driven by ...

Peddlers
Peddlers sold every kind of good and services. From candy to shoe repair to medical services.

Apparently, the world was once a lot more mobile. I don't think you needed a license to sell things, nor were the goods or services you sold overseen by any sort of standards committee. So buyer beware.

One type of peddler sold ice in a horse-drawn carriage for the iceboxes. Kids would jump onto the back of the wagon hoping for slivers of ice to suck on. Others sold gum or chocolate for a penny.

Some of the medical services included ... 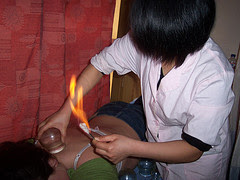 Bankes
Also known as cupping or fire cupping, it was used by many Eastern European Jews. Basically, you heat the air in cups, put it on the skin, and then pull it away after a suction forms. Leave nice dark circles. It's still used today in some places as a form of acupuncture/acupressure.

Another treatment was to put mustard plaster onto a cloth onto the skin, also for the apparent effect of stimulating the skin. And there was always cod liver oil.

Games
Believe it or not, people played games back in the 1940s. Some games my mother played:

Spauldine
Everyone called it a "Spauldine". It was a pink rubber ball the size of a tennis ball. I can only assume it was produced by the company Spalding.

Cheese box
Three pounds of cheese was sold in these. They made for cheap wooden storage boxes in school for pens and stuff.

Grades
In my mom's school, there were grades 1A, 1B, 2A, 2B, and so on. Not in parallel, as in two 1st grade classes, but in sequence. You graduated 1A half-way through the year and then went to 1B. 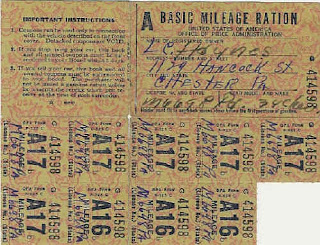 Ration stamps and ration points
Ration stamps were given out during war time owing to shortages of meat, cheese, gas, metal, and so on. In order to buy something, you had to pay both the cash cost and the ration point cost in stamps.

Subway
I'm not sure how it is today, but back then the front car of a subway was a glass door. Kids would stand up by the door and watch the tracks go hurtling at them.

Ink wells
School desks had builtin inkwells for writing with pens which dip in to them. Also good for dipping the ponytails of the girl in front of you.

Fluoroscope
You may remember these from cartoons where the cat runs behind it and you see the cat's X-ray (and the bird the cat just swallowed). They used to use these all the time. Everywhere. You would go into a shoe store, and the assistant would have you stand with your foot under a Fluoroscope for as long as you were trying on shoes.

It was all great fun until they discovered that X-rays cause cancer.

Civil service
The Police Athletic League was one of those wholesome activities you do to help make yourself a better citizen. They opened the fire hydrants for the kids to play in the water, and drew painted hopscotch boards on the streets for kids to play in. Nowadays, I'm not sure if that would still be considered being a good citizen.

Along with the PAL, there was the Air Warden Service and their Air Raid Wardens, who trained on directing people to air raid shelters and giving first aid. One of the things they used to do is run civil defense bombing drills. After WWII, they ran civil defense nuclear fallout drills.

And if that isn't enough, she was also part of the Civil Air Patrol, or CD-CAPC doing air force training, ROTC, and the American Youth Hostels, or AYH, which used to be people who organized hiking and writing to pen pals and offering lodging for fellow travelers. This evolved into today's youth hostels, I believe.

She was also on the English Service Squad, which gave you service credit for being a gopher for your teachers. Service credit was added to your school record and was helpful for your college application.

School hallways
School hallways had traffic lines down the middle. You had to walk on the right side of the line. They also had up-only and down-only staircases. An excellent book on these type of phenomena is Up the Down Staircase by Bel Kaufman; it was also made into a movie. Very funny and poignant book, even today.

Needle Trade
This is what they called low-level workers in the garment district who did the sewing and so on.

Delaney cards
Every teacher in every subject in New York gave these cards out on the first day of class and the students had to fill them in and pass them back. They were supposed to contain vital information about each student: name, address, emergency telephone number, etc.

The cards were put into pages with slots on them according to seat order, so as to help determine a) the names of the kids while you were still learning them, and b) who was absent.

Seniors hats
Seniors in high school were given the privilege of wearing a hat sometimes which they could decorate. This was supposed to be cool.

Email ThisBlogThis!Share to TwitterShare to FacebookShare to Pinterest
Labels: personal

In the 1940's, hat-wearing was a privilege reserved to adults, and the hat you wore usually represented your job or social status in some way.

My grandfather gave me a hat on my 18th birthday. At the time, I was confused by the gift. He was always very good about giving good gifts (stuff I wanted). It was only a few years ago that I realized that this was his way of welcoming me to adult life. To his generation, hats are a sign of adulthood.