Well, I guess I may as well be the one to break the big news.

When I went to BGG.con last year, I had a great time meeting Derk and Aldie. Derk and I had a nice talk and he ended up buying the Traumfabrik CD from me. This happened before I sold Traumfabrik. I ended up getting someone else to help sell the game for me afterwards, although there was some confusion as to whether it did or didn't include the CD. That's because I wasn't at the flea market, since it was on Saturday morning.

Derk was very interested in understanding why I couldn't come on Saturday morning to the flea sale, and we ended up having a long discussion about Shabbat and Judaism in general.

Derk and I continued our conversations over the course of the year, and he also visited the local synagogue that I went to on our trip. To make a long story short, Derk stunned me one day with an email telling me that he wanted to convert to Judaism!

Jews are supposed to discourage conversion, which I did. But Derk wrote this week to tell me that me converted. Now he is talking about moving to Israel!

Here's Derk with a kippah on his head: 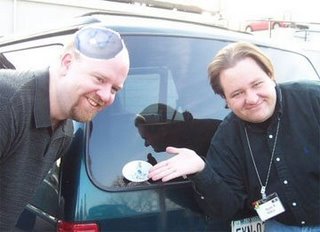 What does this mean for BGG?

BGG.con will continue to be in Dallas this year. However, if Derk really does move to Israel (he asked me to look for an apartment), next year's BGG.con may end up being in Israel. I would like it to be in Jerusalem, but I think it may end up in Tel Aviv. Oh well. It's still closer than Dallas.

BGG is going to stay the same, of course. You will hardly notice anything at all, although the following changes may occur:

- Derk won't be able to moderate from sundown Friday until nightfall on Saturday.
- Ads on the site can't be about non-kosher products.
- In addition to Geekquestions, there will be a new feature "Geekproblems"
- Geekgold will become "Geekgelt" (just kidding).

Anyway, Derk is now looking for a shidduch, so if you know any interested Jewish girls, let me know and I'll pass them on to him.

And a Happy April 1st to you, too, Yehuda.

Yes. This must be a Fool's Day joke.

This was good. I needed to sharpen my wits for today, since we will be visiting with our 8 and 10 year old grandchildren, and I expect to be bombarded with April Fool's jokes all day.