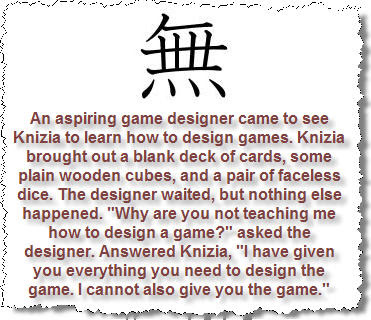 Just fooling around with Snagit.

What's the source on this? I remember seeing it before, but I don't remember where....

Interesting ideas. The idea of relegating "winning" to an archaic idea seem to reflect a desire for a "kinder and gentler" world.

As technology has moved forward, we live easier and easier lives. Competition has becomes abstracted from the early *true* competition for food, living space and mates.

Today we are so insulated from "reality" by technology and social structures that it is possible to almost forget that every piece of food you consume is denied to someone else. In Western nations the idea of a food shortage is neatly masked behind a massive overproduction of food and efficient mechanisms for distribution.

We think more about competition for living space, if only because the costs involved are significant enough to make it clear that our dollars are competing with others. Yet this competition has been abstracted out into the bidding war: it is unlikely my rival bidder will physically attack me down to eliminate the competition... at least here in Tucson. I have heard New York gets a bit heated :).

The war for mates remains the most similar to more "uncivilized" days insomuch that the number of humans has increased, but in equal numbers. More poignantly, I'm much more likely to be physically attacked by a rival suitor than a rival real estate bidder or a grocery shopper.

So how does this all relate back to games? Well, I think the idea of a "winner" actually related to a deep seated competitive drive (in males especially). Take a look at Board Game Geek's ratings of games that have no "winner", and you can see that the Alpha Gamers there find that idea a non-starter.

Thus, the "winner" concept is an outlet for the competitive spirit in a world where competition with others has become so abstract as to be greatly unsatisfying to that competitive drive.

Eliminating that concept brings us games like "Once Upon a Time"... a game where the true winners are those who participated *together* in telling a compelling, funny or interesting story. The whole idea of "playing the ending card" gets relegated to the task of constructing an amusing story. However, say such on a bastion of Alpha Geeks like BGG results in a torrent of criticism about how "stupid", "boring" or "pointless" the game is.

Something tells me that the deeper problem with "winning" is that humans still cling to a competitiveness that exhibits itself violently when placed in truly competitive situations and manifests itself in indirect ways when humans are coddled by the environment.

Cheering for your favorite sports team. Crushing your brother at one on one basketball. Gloating over "winning" a board game. Subtle lording over the guy who your girlfriend *used* to be dating. These are part and parcel with a sad-but-true element of humans, especially men.

So while I can agree with the premise of the idea here, I wonder how likely it is to be received by the wider audience that is composed of mostly the unenlightened. Because from my experience, even the "enlightened" male has simply moved his competitive behavior into something socially acceptable.

seth: I posted nine game koans to gone gaming several months back. This was the first one. I have a bunch more now, too. I'll repost the old ones and some new ones here once in a while, I guess.

I stress several times that I am not against competition or relative rewards. I am against the absoluteness of all-or-nothing winning.

In other words, if 100 people run a race, there shouldn't be 1 winner and 99 losers. Each person should be judged for "winningness" relative to how well he performed.

In this case, people still want to achieve more winningness than others, but the actual results don't depend on others failing in order to win.

Cheering for your favorite sports team is not the same as booing the other team. The way we structure games today, one has to lose for the other to win. But that's not absolutely necessary.

That's right! Well, I enjoyed the koans the first time around, so seeing them again (plus new ones!) is quite exciting.