Good evening, and welcome to the weekend news.

This evening I had two conflicting event to attend: an engagement party for Josh and Idit of the game group, and a remembrance talk for the son of some dear synagogue members who was killed in an accident fifteen years ago.

Rachel went straight to the remembrance, while I drove Nadine to the engagement party, only to discover that we were both about twice the age of everyone else there. We skipped out of that and arrived at the remembrance, only to hear the last few sentences of the talk.

I figured that with good set of wheels, we could probably also have hit two weddings and maybe a bat-mitzvah all in one evening. You know, get them all out of the way.

Unfortunately, I fear that this will be no more successful than the plan I hatched last time I was in Eilat, which was to stock up on newspapers for the next month, rather than have to buy them one at a time.

We played The Menorah Game two times, and I won both times. I still love the game, which makes me happy. Then we played a game of Oh Hell. Tal took the lead, but I narrowed the gap until it came down to the very last trick, which she won.

Toward the end of shabbat, Nadine came over for our usual shabbat Puerto Rico game.

We played the same positions as last time: Rachel first, me second, and Nadine third. This time I tried a first round Hacienda followed by a second round Settler/quarry. Of course, this left both lots of cash and corn plantations for Nadine and Rachel, which was going to make the rest of the game an uphill battle.

Rachel had a coffee monopoly, and I had an effective tobacco monopoly (Rachel produced it, but never traded it). It didn't help that Nadine gave Rachel two early sweet trades (she later gave me one). Rachel jumped on these opportunities and secured a large victory at the end of the game 54 to 46 (me) to 45 (Nadine).

Nadine could have changed the ending slightly if she had taken City Hall instead of Custom's House as her big building. It gave her 6 points, but it would only have given Rachel or me 3 points, and meanwhile, City Hall would have given her 5 points. So she would have ended up beating me. Hard to see, though.

The Columbia Tribune runs a story on the new board games.

Promo Magazine, and the Campaign for a Commercial-Free Childhood, is unhappy about the new Visa branding in Hasbro's games. 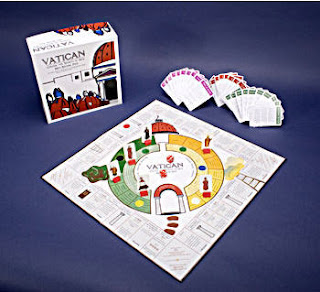 Symbiosis University in India has launched a three-year diploma for students to learn Chess.

Brian Arnett holds the world record for collecting board games at 1,345? And the previous record was only 868??? Isn't this incorrect?

Vatican, the Board Game. Race to become pope.

Shigeru Miyamoto, designer of titles such as "Mario Brothers," "Donkey Kong," and "The Legend of Zelda," says that video game developers should resist the temptation to produce only sequels of established hits and games based on horror and revenge.